Leadership Luncheons put on by the Mid-Maine Chamber of Commerce feature leaders in Maine. Each lunch showcases a different professional, their path to success and struggles they have faced along the way.

PLEASE NOTE: Cancellations must be 2 business days prior to the event to avoid being charged. 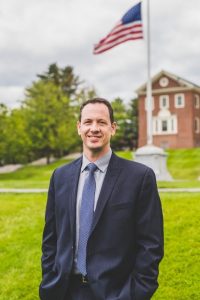 Commander (ret) Wisecup was born in Buffalo, NY.  He grew up in various locations throughout the country, completed High School in Noblesville, IN, earned a Bachelor’s of Science degree in Oceanography from the U.S. Naval Academy in 1998, and completed postgraduate studies in Mumbai, India at the Indian Institute for Technology and Management where he received a Master in Business Administration.

His military operational assignments include SEAL Team ONE, SEAL Team FIVE, SEAL Team EIGHT, and Special Boat Team TWELVE.  He has deployed multiple times to Iraq, Afghanistan, Africa, and throughout Asia.  His staff assignments include Combined Forces Special Operations Component Command – Afghanistan, Combined Joint Task Force – Iraq, and Joint Interagency Task Force – National Capital Region.  In 2011 he was selected as the Aide-de-Camp to the Chairman of the Joint Chiefs of Staff, GEN Martin Dempsey.  From 2015-2017 he served as the Commanding Officer of Special Reconnaissance Team ONE, and concluded his military career as the Deputy Commander of Combined Joint Special Operations Task Force – Iraq from 2017-2018.

Mike retired from the Navy in November 2018 and joined Colby College as the inaugural Presidential Leadership Fellow.  In June 2019, he transitioned into a new role at Colby College as the Vice President for Strategic Initiatives at Colby College.  He also serves on the board of Camp Sunshine in Casco, ME and organizes the annual SEALs for Sunshine fundraiser to support military family attendance at camp.  He is married to the former Ms Emily Bell of Henley-on-Thames, England.